If we take two vessels, fill them with electrolytes with different charges and put a diaphragm between them, then an interaction of liquids will give rise to an electric current. The movement of electrons from one pole to another – this principle, according to archaeological research, was known thousands of years ago. The only question is in the material from which the battery is made, and recently in Harvard proposed a new efficient type of organic batteries.

Traditionally, the best materials for electrolytes of flowing batteries are bromine and vanadium compounds dissolved in acid. Components are expensive, corrosive, requiring corrosion protection for the entire battery design. Over the search for their replacement, scientists have been fighting for a long time and in 2014 at Harvard began a large-scale project to study quinones. This is a common name for organic molecules that are used to store energy – researchers had to study more than 10,000 species in search of suitable ones. 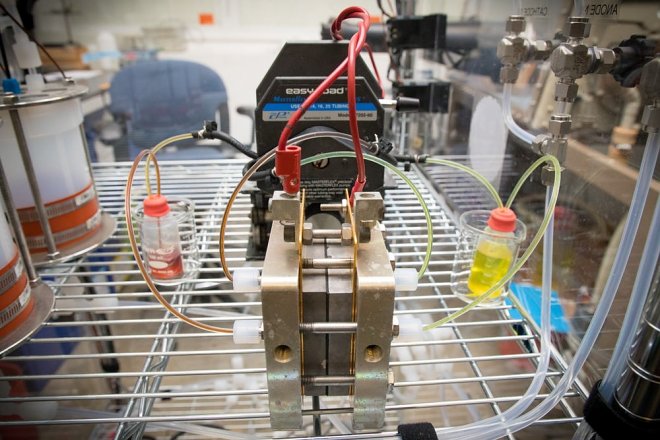 First, scientists managed to replace bromine with ferrocyanide and switch from acid to alkali, then they modified vitamin B2, and last year they refused from caustic mixtures in favor of neutral aqueous solutions. And today the world is presented with a new quinone, a man-made organic molecule with outstanding indicators of capacity and durability. It was called “Methuselah”, in honor of the old biblical old man.

In tests, the battery with molecules Methusel in a weak alkaline solution showed a loss level of 0.001% per charge-discharge cycle, not more than 0.01% per day of work. This means that the degradation of the battery will be only 3% per year and it will be able to compete with other types of batteries. The cost of such a battery is also low, which allows us to talk about its future mass application, when the technology will be transferred to commercial lines.

An incandescent lamp, competing in efficiency with LEDs

Aerosols with nanobots will save our world?