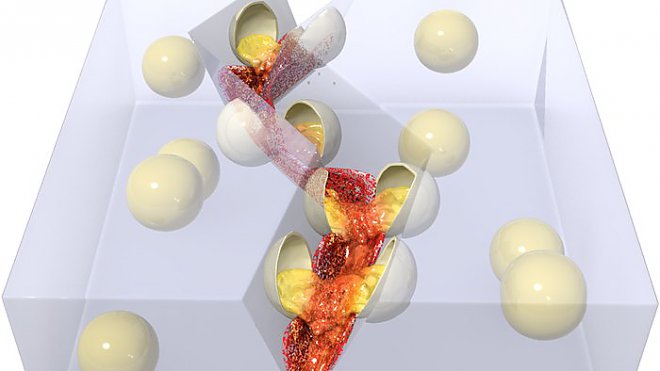 Microcracks have often caused air crashes and severe accidents involving the destruction of bridges and pipelines. That is why the specialists responsible for the operation of complex engineering facilities have the task to detect them as early as possible.

Specialists of the University of Illinois, under the guidance of professors Nancy Sotos and Scott White, developed a new polymer coating for various structural materials. Its main feature – the ability to change the color in the event of the appearance of tiny cracks.

The polymer contains epoxy resin microcapsules filled with a light yellow pH-sensitive dye. In the absence of damage, the capsules remain intact. But, as soon as a microcrack appears in the rupture region, a dye is released, which immediately reacts with the epoxy resin. As a result, a spot of bright red color appears at the site of damage. The spot increases depending on the size of the crack.

According to the researchers, the polymer has already been successfully tested on some metals, glass and other polymers. The cost of coating is not high, since in its composition only 5% are microcapsules.

In the future, scientists intend to give the polymer the properties of self-healing. That is, at the beginning, the polymer, changing the color, “inform” about the presence of a crack, and after “cure” it, will again take the original color.

10 people who want to be forgotten by Google

The Best Photographs of Barack Obama’s Presidency – In Pictures